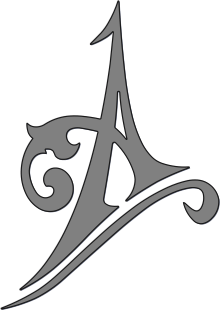 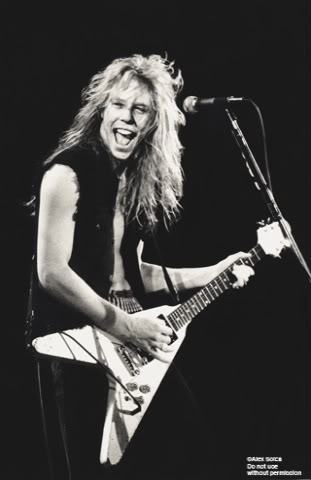 KILL ‘EM ALL -RIDE THE LIGHTNING

James Hetfield’s main guitar (only guitar) for recording and touring behind Kill ‘Em All was a white Flying V COPY by Electra. James used this in the studio and live until the neck snapped and it was retired. That is when James moved to the Explorer guitars.

James has stated several times that although it was a copy, they treated it as a real Gibson. James has mentioned in an interview that this is an Elektra Flying V copy.

“I got my white V in 1980, ” James Hetfield recalls. “It was the second guitar I ever owned, and I probably bought it for $200. I knew it was a copy, but we treated it as a real Gibson. I wanted a white one because Michael Schenker of U.F.O. had one, so I needed one, too. The neck snapped on it twice on tour. It’s been glued quite a few times. It’s got Seymour Duncan pickups in it, with a little more output for the crunch than the originals had. The only other thing that’s customized is the artwork [laughs]. That was the first guitar I started scratching stuff into.” – Jon Wiederhorn via guitar world

Originally painted Red, the guitar sported a white finish all throughout James’ usage in Metallica. While on tour, a break caused James to switch to his backup guitar, a white 1984 Gibson Explorer. This change would see the white flying v copy take a back seat to James’ newfound love. The back of the body has a hand with raised middle finger etched (by James, as stated above) into it.

At some point, James installed a Seymour Duncan Invader pickup into the bridge position.

This is not James Hetfield's guitar, it's an Authentic 70's Electra 2236 customized by Avatar2100

BE AWARE OF ALIEXPRESS WEBSITE! THEY HAVE STOLEN MY PHOTOS AND MISLEADING PEOPLE. MY GUITAR IS 100% ORIGINAL, NOT A CHEAP CHINESE COPY!

AFTER - customized by Avatar2100

Several years ago before recording Death Magnetic, James had this guitar brought back from the dead. It underwent a full tune-up by Gary Brawer and brought up to current Metallica specs, including the addition of EMG 81 and 60 pickups. It was used quite heavily during the recording of  Death Magnetic.

James relied very heavily on the Kill ‘Em All Flying V for his work on Death Magnetic.  This was after the refurb by Gary Brawer, so brought up to current (at the time) Metallica specs including EMG 81/60 pickups. 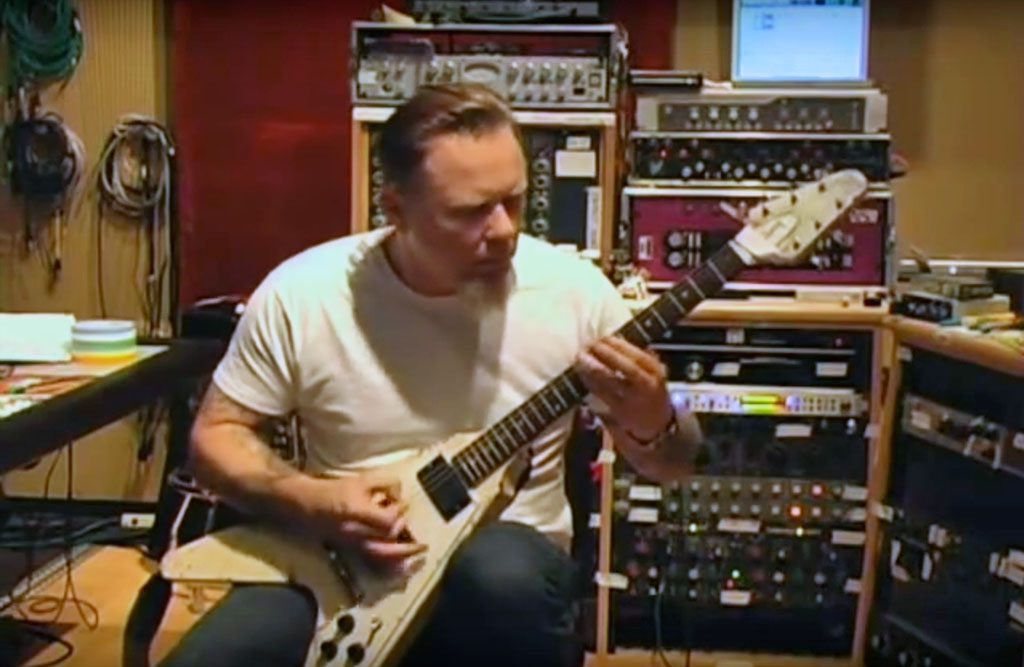 Are your guitars set up a certain way to make it easier for you?

I never really pay much attention to that aspect of it. Most of my guitars have been instruments that look cool. I’m not picky. I never think, Oh, this neck isn’t made of ebony, or, These strings don’t feel correct. It doesn’t matter too much. Now, though, I’m paying a little more attention to what strings I’m using because they help me stay in tune. But I just like playing fast riffs. It’s as simple as that. In fact, it comes so easy to me that maybe there was a time, like while we were writing the “Black Album” or Load, that I needed a different kind of challenge. But now it just feels good to go to that place.

A lot of it has to do with playing my old guitars again. I’m actually using the white V and the old Explorers that I played on the first few albums. I’m also plugging into the Mesa/Boogie Mark II C+ that we used on all the early albums.

But what got you back into using your white V?

That amp with that guitar is magic. No other explanation. It’s not the beefiest or fattest sound, but the mids just come alive.

And the white V—it’s not a Gibson V, right?

No, it’s a Japanese knockoff. It’s actually the third guitar I ever owned. My first guitar was a swap-meet thing that I paid five bucks for and painted about 12 different times. I put Eddie Van Halen stripes on and all that stuff, like every kid did. And the second guitar I had was, like, a ’69 SG that some kid sold me in high school for $200. I traded it for a PA because I wanted to be the singer, because everyone was looking for a singer back then. And then the next guitar I bought was this V.

Somebody sold it to me as a Gibson V, and as a dumb kid I had no idea. Eventually it dawned on me: Oh, it has a bolt-on neck. It can’t be. Hmmm, why does it say “Made in Japan” on it? [laughs] But I didn’t care. I didn’t have a care in the world. It’s a white V! It’s Michael Schenker, it’s Scorpions. That’s was metal: black pants, white V, go! I couldn’t care less that it was not a real Gibson.

It created your signature sound. I’m always fascinated with stories of people finding these basic tools and making them work to create something amazing. I think most great music comes from that. It’s not about having every tool. It’s about working with what you have.

It’s the struggle. From struggles come great gifts. Even though you don’t know they’re gifts at the time. Later on they become that. ESP makes me amazing things—anything I want, but I still use that guitar. It’s a shitty Elektra copy of a Gibson V from the late Seventies, maybe, early Eighties. And yet, here I am, holding it on the cover of Guitar World!

On the subject of looking to your past, you went back to some of your earliest gear to make this record.

Hetfield: I was inspired by this photographer who wanted to get an iconic picture of me with a somewhat iconic guitar. When I pulled out my early guitars—my old Kill ’em All white Flying V copy and some of the Explorers—I rediscovered how well they played. That V—some guy ripped me off as a kid. He put a Gibson trussrod cover on it, and he sold it to me as a Gibson—even though it has a bolt-on neck [laughs]. I didn’t pay much for it, and I didn’t care if it wasn’t a Gibson. It was white, it was a V, and I was Michael Schenker. Anyway, I started playing that guitar again after the photo shoot, and it felt so good—so fast. I plugged it in, and, man—it has this midrange quality that’s undeniable. We ended up using it on the record. As for amps, I’ve always gone back to the Boogies, whether it’s the Triaxis in my rack or my old C++. We might add an amp here or there, and, for this record, we ended up using an Ampeg that helped with the mids, a Krank, and a Diezel. The main sound is the Boogie, though. When I plugged the V in, I said, “Oh my god, it’s Ride the Lightning!” It felt very comfortable and very familiar. Rick was really into dry, cleansounding rhythms, and those tones can make it tougher for me to get the fat chugs and the chunky downpicking. If you play with a saturated sound, you allow that saturation to take you different places. You play a little softer, and you concentrate more on cleaning up the note, rather than hitting it hard to distort it. So, when I picked up the V and plugged into the Boogie, it allowed me to get back to the older style a little.

Even though you played that V early on, you’re much more known as an Explorer guy.

Hetfield: My backup was a Gibson Explorer, but I didn’t play it much until the neck broke on my V. That’s what got me into the Explorer. It’s similar to what Tony Iommi went through. He played a Strat, and, when that broke, his backup was an SG

The intro tone to “Broken, Beat & Scarred” definitely has that fatness. How did you get that tone?

Hetfield: It’s two guitars—my Iron Cross Les Paul, which has a lot of girth to it, and the old Kill ’Em All V, which adds some mids and highs. The combination is a great sound. A lot of it has to do with the aggression and the muting as I’m playing it. I’m really hitting it. You can really hear the scrape of the pick on the strings. That was one of those cleaner tones, and, when I don’t have the crunch of the amp, I tend to use the strings a lot more to get some of that [sings] sssshun-jun-jun-jun. There’s the noise before the note, and actually after it, which is really important.